I'm just letting all my neurons cool down after a fantastic Drupal Camp at City University, London. These Drupal camps are getting bigger, better, and much more frequent in a really, feely, organic way. They never feel like there is a sponsor driven sales push to use this service or that, moreover, it genuinely does feel like a community of like minded people, groups of people, willingly sharing their knowledge, ideas, and enthusiasm in what it is they are doing, using, or believe in.

The keynote was by David Axmark, co-founder of MySQL AB, and one of the real players in the shaping of how the open source World evolved. It was a very engaging talk covering the inception of MySQL, to it's $1 Billion sale to Sun Micro-systems and subsequent sale to Oracle. He is a man who is obviously still passionate about licence issues, the tyranny of software patents, and the rise of nosql databases. He is still very active with MariaDB and put forward some good arguments using Maria against NoSQL. There is also a Drupal Camp London 2013 Interview available on YouTube. 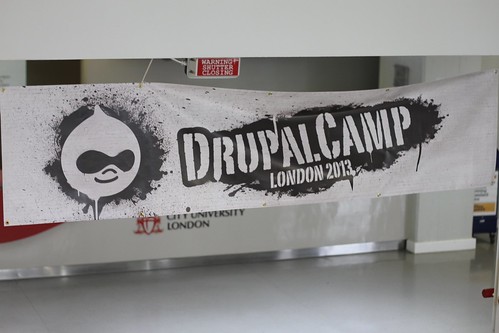 For me, every camp has a different theme, flavour, running through it. I'm not sure if that's because of the tracks I choose, or, whether that is the way the tonal centre of the camp evolves. The fantastic Manchester Camp, at Media City in November, had a themer theme running through it. Whereas the London Camp, had more of an emphasis on developers, development, development environments. My first session was Drush Make Driven Development with Steven Jones. As someone reasonably new to Drush and Git (About 12 Months) I was a little concerned that I was going to be left cross eyed and bewildered, but Steven's skills as not just a developer, but a speaker, kept me totally engaged and with it, knowing full well that he would be uploading the slides to refresh my informationally bombarded brain.

Over the entire weekend I had a bit of a Vagrant fest. My next session was what sparked that off. I've dabbled with Vagrant before, but not knowing to what ends. My Vagrant Love: A Developer’s Kiss-and-Tell by Joe Baker gave me a lot more to go at, and a better understanding of what I could do with it when I got there. I've used "vagrant up" numerous times since this talk.

Wake up and smell the CoffeeScript with Rob Knight was also an engaging talk. He very eloquently explained and live demo'd using coffee script. As someone who's a regular semi-colon excluder, and lover of DRY, I can see the benefits. It reminds me of SASS for Javascript.

More vagrant! Make your cheap VM fly with Greg Harvey was very exciting. I feel quite antiquated using LAMP stack now. This was all about serving drupal on nginx, with varnish, percona, and all the trimmings. It was a really good talk for addressing some of the criticisms Drupal hosting sometimes unfairly receives. 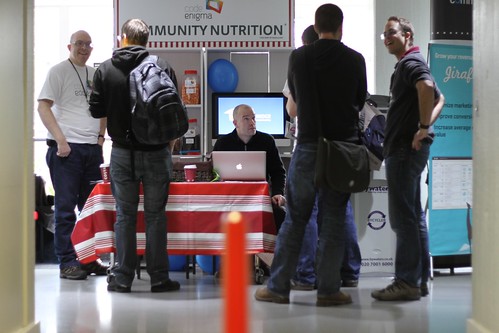 Next up was Drupal Commerce and SagePay - the reboot (with added doughnuts) by Richard Jones. It was really good and showed how Commerce is now more than a one trick pony with payment gateways. Commerce is awesome, but the lack of payment gateways has been holding it's World domination back.

Yea, more vagrant, but I'd not had enough. Vagrant: A crash course by Marcus Deglos was entertaining and educating. This talk gave me a lot more practical uses for rapidly setting up development environments, and what to do with them when I've got them. I was wondering on the bus on the way home whether you could use Jenkins to move those config's about? But then came the social sponsored by Agile Collective. It's like a dream night having a pub full of Drupalistas, and talking Drupal progressivly louder and more slurred as the evening went on, and good laughing at some people who developed jelly legs.

The Sunday was a little more subdued to with a few self pitying groans from here and there. The keynote was Step 4: Distributions could help, if we do them right by Robert Douglass He started off by talking about what's needed in Drupal in terms of distributions and modules. However, he was actually reading from a 2006 blog. Highlighting that not enough has changed and more can be done to compete against Wordpress's theme forrest, and Google Apps. There is a lack of Drupal Apps in the App server. It did have me thinking about the UI in all what I develop.

Next was Drupal 8 Configuration system for Coders by Alex Pott which offered an insight into settings, state and config in Drupal 8. It was a good talk, and heads up for developers to look out for en route to Drupal 8. I was feeling a bit jaded, but Alex kept me engaged. 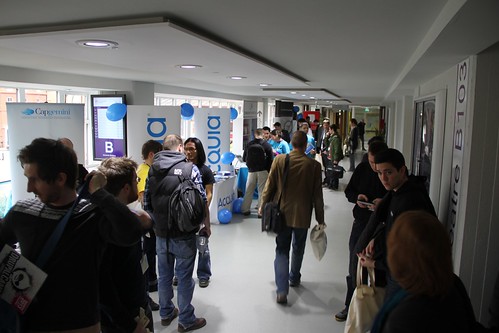 Death of a Themer by James Panton was a really interesting presentation which highlighted a cool way of tidying up your markup. This was also a great tool provider. In essence it was about stripping bare the tpl.php and using Display Suite, Panels and Panels Everywhere to render the page. I've not put it into practice yet. I can see some pitfalls, like slideshows etc, but we are definitely looking at it as a way to dramatically reduce the

My final talk was by Steve Cowie from Code Enigma explaining Distributed working - how to work from anywhere It was an honest insight into distributed working which highlighted some factors I'd never thought about: like different country employment laws, and how to use Agile and Scrum with a distributed team. Definitely looking at our organisation becoming distributed using a lot of the structures Steve highlighted.

All in all, it was a fantastic weekend, and I only wish I could have been in loads of places at once. I wanted to do the BOFF sessions and I definitely would love to have joined in with some of the sprints, but having too much choice is a good thing right? I can't wait for the next Drupal camp. Drupal rocks my disco, from our local user groups to the Drupal camps, and this year I'm hoping to to go to the European Drupal conference in Prague.

Thanks go to Pedro Lozano for allowing me to use some of his amazing pictures from the event in this post.

Permalink
Awesome writeup Paul! Especially like that you have put links to each of the talks :) I wasn't able to make it so this will give me a good way of catching up.

I've been looking at Drupal hosting solutions recently, and after trying a few I thought I would write a quick review of each. I was specifically looking for hosting providers that provide dedicated Drupal hosting support and an administration dashboard of some kind. It turns out that a handful of such suppliers exist. Whilst it is perfectly possible to setup a server on AWS or DigitalOcean and then install Drupal there, this isn't what I am looking at. The good thing about Platform as a Service (PaaS) solutions is that you get hosting, backup, recovery, logging, tools, and analysis all built in. Some platforms even have extra tools like build pipelines, marketing systems or analytics.

Drupal 9 will be released on June 3rd, 2020 so with this just around the corner I thought I'd put together a post about how to check if your site is ready. The transition from Drupal 7 to Drupal 8 was more of an upheaval than an upgrade. Updating a Drupal 7 site to Drupal 8 requires a lot of effort involving code changes and migration steps. Drupal 7 modules are not compatible with Drupal 8 and so any custom code written needs to be adapted to the new structure of Drupal. The difficulty of this change made the Drupal community take notice and think about how future versions of Drupal are introduced.