The city of Sunderland played host to DrupalCamp North, which saw Drupal users and contributors travelling from all over the UK and Europe to attend. The event, which was held from 24th-26th July, was jointly led by the North East, North West and Yorkshire Drupal User Groups and consisted of a three day sprint, a business day, and a two day conference. 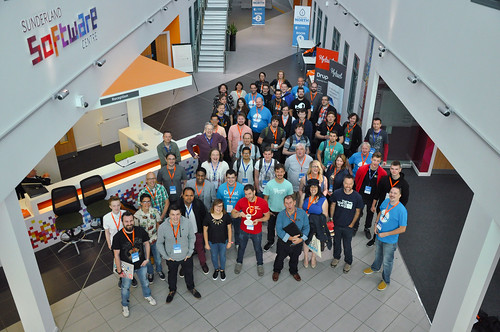 Due to work constraints I wasn't able to attend the sprints or the business day but I attended the main conference days and a group of colleagues drove up from Manchester on the Friday night. Our accommodation was booked through Sunderland University and were a short walk away from the camp venue, which was great.

After the open session on the Saturday morning we saw the opening keynote from David Rozas on Talk is silver, code is gold? Contribution beyond source code in Drupal. David has been doing a lot of analysis on the Drupal community and how people interact, as well as looking at the social sciences behind both the open source movement and the Drupal community in particular. This was a fascinating insight into a world of social sciences I hadn't realised was there and David (who is currently writing his PhD on the subject) clearly knows his stuff.

Next up was Emma Karayiannis, who talked about Contribution: Getting involved and coming back for more. This was a really inspirational talk on how to get involved in Drupal sprints (which isn't just about code) and how to organise a sprint to help contributors come together. I will definitely make the effort to get involved in more sprints in the future.

As I was giving a talk in the session after next I decided to go to the room I needed to be in, and as such I happened to see Bart Feenstra from Druid run a session on An introduction to object-oriented programming. I'm glad I attended as it was a really interested talk in itself. I've head object-oriented programming being described as 'the science of long words' and Bart did a really good job of breaking down the complexity into simple to understand chunks, each building upon the other. A really good talk.

My own session on Drupal Performance went well and was perhaps the best delivery of the talk I have given so far. Although I've only given it to people at work and the local user group so this was more a crowd of strangers. The talk seemed well received and I had people approach me for questions and a chat afterwards. If you want to see the slides for the talk then you can see them on slideshare.

After lunch I missed the next couple of sessions as I was busy chatting with various people but I managed to jump into Michael Trestianu's (from Hydrant) talk about A year working with Drupal. He went through a few case studies on work he has done at Hydrant and I'm impressed with how much Michael was able to tackle within Drupal in just a year. Michael also went through a few development techniques, including rubber duck debugging so it was good to see that he is interested in other aspects of development. It was interesting to see how beginners are able to get up to speed with Drupal and the sort of things they used to understand the system. 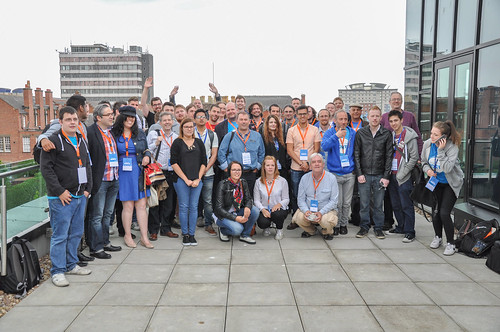 The Saturday closing keynote was from Holly Ross, who talked about the State of the Drupal Association. It's really good to see (and be a part of) the healthy community of people surrounding Drupal. It's also good to see Drupal being adopted in other countries (like China) and how they are also setting up camps and meetups in the same way.

After the closing session we went to the roof to watch the Red Arrows do a display over Sunderland. The camp was held on the same weekend as the Sunderland air show and the Red Arrows did a display every day. We were a little far from the action, but it was still great to see them perform; one even flew right overhead. We all then headed over to Place Cafe (which was a minute walk from the venue) to have dinner and talk over some drinks. This consisted of a hog roast, and trimmings and was really nice. We finished off the day by going out into Sunderland for the night for some more chatting and drinks.

After finally making it into the conference on the Sunday morning, suffering from hangovers, we unfortunately missed the opening sessions. We did manage to arrive in time to see Jeni Tehan, from Delicious Creative talk about Ansible and Install Profiles. I use Ansible quite a bit on the Vlad project so most of this was pretty familiar, but Jeni did open my mind to getting Ansible to run things that would otherwise be stuffed into a script. So, instead of writing a script that can only be run locally, you would put together an Ansible playbook that has the potential of being run against a remote box. I will definitely be trying to do this more with my local setups as I tend to write a lot of stuff in scripts that tend to get lost. 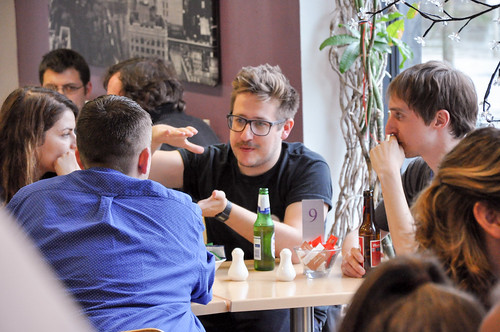 A quick break for coffee and I then went to see Lauri Eskola from Druid with Drupal 8 Theming. I've seen a few introductions to theming in Drupal 8 over the past few months and this is one of the better ones. This might be because there is a lot more is now finished within the Drupal 8 theme layer and as such the talk was less abstract, but I think Lauri also delivered a good talk. Most interesting was the way in which the new core theme called Classy is being used to allow core Drupal themes to have all the functionality and files they need but without dictating those settings to custom themes. The Drupal 8 theme team have done some amazing work and it really shows when you look into Drupal 8.

Afer Lauri, we had Ashley Johnson from Access Advertising run a session about The Project Management Toolbox. Working with Ash I had already seen him give a version of this talk but he really excelled in delivering a cracking talk (even whilst being quite hungover). Ash had spent time creating graphics that showed the project management process and there was lots of interest in them during the talk with several people taking pictures.

The final session of the day was with Simon Nichols, who talked about

DrupalCamp North 2015 was a really great camp and a fantastic weekend overall. I learnt a lot from the sessions, met up with some familiar faces, but also made some new friends. The camp was organised really well and Sunderland Software Centre was a perfect venue for the camp with great facilities and breakout rooms. Massive thanks to everyone involved in the organisation of the camp and making sure things ran smoothly on the day, I look forward to being there next year! Also, thanks to DrupalCamp North for posting some great pictures from the weekend on Flickr (some of which I have used in the post). 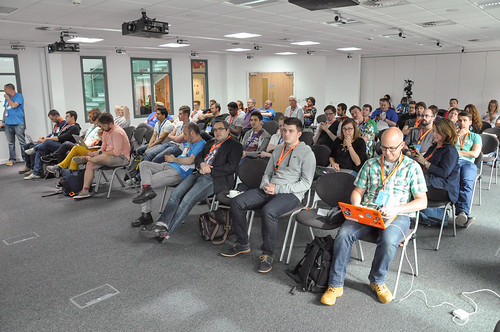 Permalink
Thank you very much for the post and for such a nice review of my presentation, Philip! Reading this is very encouraging to keep on working on my research :-)

I've been looking at Drupal hosting solutions recently, and after trying a few I thought I would write a quick review of each. I was specifically looking for hosting providers that provide dedicated Drupal hosting support and an administration dashboard of some kind. It turns out that a handful of such suppliers exist. Whilst it is perfectly possible to setup a server on AWS or DigitalOcean and then install Drupal there, this isn't what I am looking at. The good thing about Platform as a Service (PaaS) solutions is that you get hosting, backup, recovery, logging, tools, and analysis all built in. Some platforms even have extra tools like build pipelines, marketing systems or analytics.

Drupal 9 will be released on June 3rd, 2020 so with this just around the corner I thought I'd put together a post about how to check if your site is ready. The transition from Drupal 7 to Drupal 8 was more of an upheaval than an upgrade. Updating a Drupal 7 site to Drupal 8 requires a lot of effort involving code changes and migration steps. Drupal 7 modules are not compatible with Drupal 8 and so any custom code written needs to be adapted to the new structure of Drupal. The difficulty of this change made the Drupal community take notice and think about how future versions of Drupal are introduced.